It’s taken a while for me to get back to blogging. I blame work. Too many early mornings has taken its toll on me. Even eating and exploring new places has become a stretch for me. Thankfully, I was able to make it to a friend’s gathering recently and finally had the chance to check out Aura – a bit over due, but better late than never.

Aura is situated at the National Gallery and has quite a nice view of the supreme court on a clear day.

We went for the weekend set lunch which for a price of $49++ turned out to be a really really good deal. The set lunch came with 5 starters (which by itself, was a meal in itself)

Fried calamari with a sweet chili sauce – this was really good! A spicy powder had been sprinkled on the calamari which gave it a nice tingy kick.

Crab meat pasta with a tomato base – if we had to pick a second favourite, this was it.

For our mains, we had a choice between the smoked duck or the sea bass.

The smoked duck came with a very generous portion of foie gras. Safe to say, it was a super indulgent dish. The smoked duck was done perfectly, all of us who ordered this dish really enjoyed it.

We had good reviews from the folks who had the sea bass as well. Fish was well cooked and went well with the potatoes, with a slight tinge of lemon 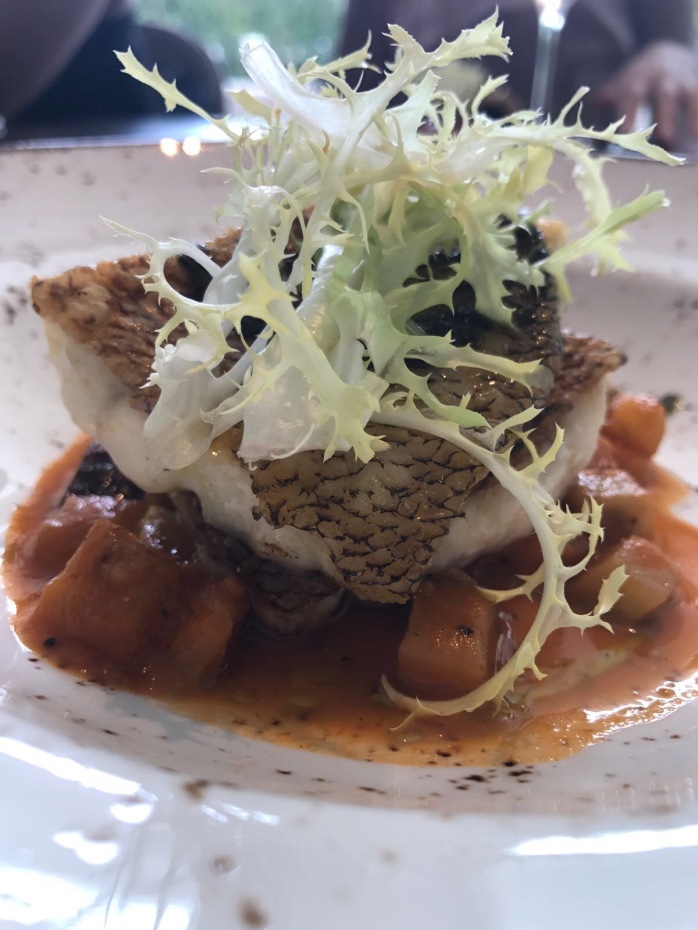 For dessert, we had another choice again. It was either a lemon cheesecake with meringue – which we liked. It was almost like a variation of the lemon meringue tart which worked.

The other, safer option was the tiramisu. Honestly, if they got this wrong, I would have been rather surprised. Thankfully, they didn’t.

We had a really really great lunch at Aura. Service was great and the staff were very attentive. We were indeed rather surprised at the amount of food that we got for the weekend set lunch. The dishes were substantial and were all very tasty. Would definitely recommend this to anyone looking for a leisurely lunch on a Saturday afternoon.