I had no idea this place even existed till one day after class we were trying to decide on a place to eat lunch and someone suggested Tsukada Nojo since it was only a 10 min walk away from school, we would definitely get there before lunch crowd peaked and chicken ramen was perfect for those with certain dietary concerns. 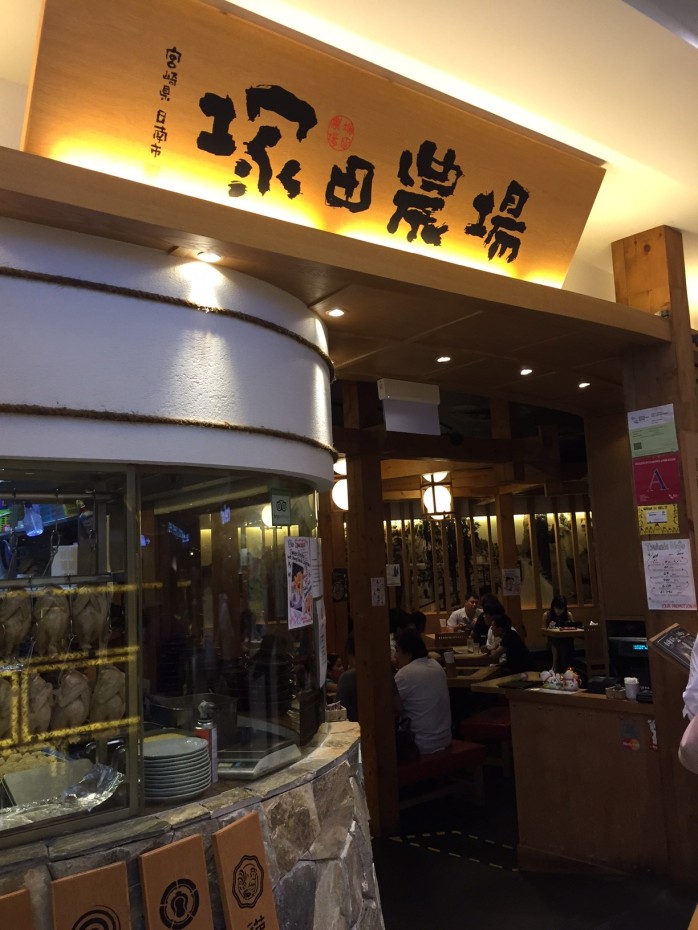 Heck, it was only AFTER I ate at this place and googled it that I realized how crazy popular this place is among Singaporeans and among girls no less for it’s Bijin Nabe and chicken collagen rich broth. Yes, that’s how closeted I am at times about the latest ‘in’ place to visit. However, you have to admit, it is rather amusing that it is not necessarily the taste of the ramen/broth that lures people here. It is the promise of some collagen rich diet that implies the consequence of making one a ‘beautiful person’ or a bijin if one were to partake in this sacred rich broth. 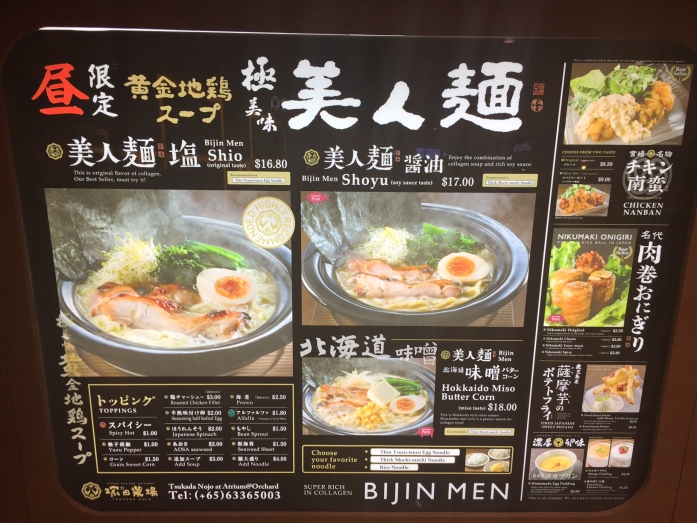 Well, since I was here for lunch, the Bijin Nabe was not available (not that I wanted it – I just wanted ramen) though all ramen broths were equally rich in collagen as was noted on the Restaurant menu board in small print – as I only belatedly realized.

According to the lunch board, three different types of ramen were offered, original shio, shoyu or miso. Being a pretty large group, we ordered the three different types of ramen. On top of choosing the type of ramen broth, you can also choose the type of noodles that you want. For a first timer, the menu will have strategically placed recommendations for noodles that take away the hassle of deciding. However, they do offer 3 types of noodles – Thin Tsuru Tsuru egg noodle (think mee kia or angel hair pasta); Thick mochi mochi noodle (Normal ramen noodle); rice noodle.

The presentation of the ramen looked the same in all the 3 types. Seriously, there is little to distinguish them by visually other then taste.

Bijin Men Shio/Shoyu – The ramen arives with the pot of noodles in steaming in the broth with the rest of the ingredients nicely presented on the plate on top of the pot. This is useful in the sense that if you don’t like certain ramen ingredients (eg. vegetables), you can just ignore it and leave it on the plate. No need to waste energy picking them out of your ramen bowl. You can also control the taste of the broth by determining how much Yuzu and/or chilli you want to add to it.

Bijin Men Hokkaido Miso corn – similar to the shio/shoyu version just that instead of yuzu, butter and corn is given instead.

So what did I think? Given that my opinions were formulated before I realized there was some collagen craze going on, I will acknowledge that the chicken broth was very tasty and flavourful. I liked the idea of being able to control the amount of ingredients you put into the broth. However, I’m was not so sure about the chicken being served cold. Don’t get me wrong, I adore cold ramen but when the ramen is cold, everything else is, including the broth. In this case, the soup was hot but the chicken protein was cold. It took me a while to get used to the change though I ended up just dunking all my ingredients in the soup for a few minutes before eating them. However, I think this is just a personal preference since the rest of the people I was with did not seem too bothered by this small quirk.

I’m usually used to my ramen broth being pork centered in nature, so I was quite surprised that having chicken centered ramen broth tasted just as good. Still not very sold on this whole collagen craze concept, but the fact that Tsukada Nojo serves chicken ramen does set them apart from other Japanese ramen restaurants and the quality of the food served was good. It was also heartening to see Japanese customers in the restaurant which does indicate that something right is being done here.